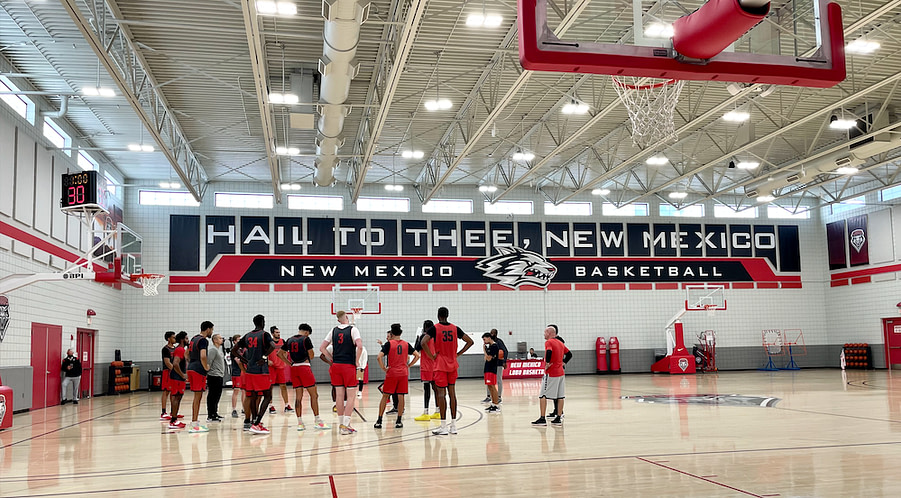 The fall season has started. The Albuquerque air is getting cooler and the New Mexico men’s basketball team is doing official practices now. Friday’s practice was open to the media.

Were there a lot of missed shots? Absolutely. Could the bigs be more physical? Sure. There are a lot of things that could be improved, but head coach Richard Pitino is not worried yet.

“It’s only October 1, we still have about five, six weeks until the first game,” he said. “Even that is going to be a process itself.”

“House, you had a good shot and you gave it up for a great shot. Good job.” pic.twitter.com/4e9YKzdIHS

Not at practice on Friday…

Senior forward Valdir Manuel has been suspended indefinitely and will not participate in team activities during suspension.

Saquan Singleton was not at Friday’s practice due to Covid-19 protocol reasons.

Safi Fino-A-Laself, a junior, is joining the program as a walk-on. He took part in the walk-on tryouts the team held last week. The 5’11 guard has been at practice this week and officially got the news today. He played at Weslaco High School in Texas.

“We are working on it.” Pitino said when asked if his bigs had a killer instinct.

The coach said the Lobos can’t just rely on shooting from the perimeter and need to get the ball inside. He wants to get the ball to the bigs and therefore expects them to step up.

“You have an obligation as a big to post up with some physicality, to demand it,” he said. “Every shot we take, we are assuming is a miss. Go rebound the basketball.”

Jamal Mashburn Jr. knows Pitino more than anyone else on the team because he played for him during his freshman year at Minnesota. He said both him and Pitino are getting better in New Mexico. The 6’2 guard said he feels his game got all around better this summer.

“Everything, I work on a lot of stuff. I stay here all the time,” he said. “My jump shot, getting to the rim, different passes off pick and roll. Different things like that.”

As for the team as a whole, Mashburn said he thinks the team has speed and will be good defensively.

Pitino said Mashburn has improved, and that he could step up as one of the bigger voices on the team.

“He knows how much I value his loyalty. It’s deeper than ‘you are just one of our players.’ It’s family,” Pitino said. “I’m empowering him to be a big voice. Even though you are younger, you don’t need to wait.”

I feel for new Lobos Jamal Mashburn Jr. and Jaelen House and even new coach Richard Pitino who always have to answer questions from annoying reporters about their dads.

Anyway, here's a video of me asking @its_jaymashjr about his dad earlier today after UNM's practice. pic.twitter.com/ZkIIbxpZ3k

Mashburn bragged about how his roommate, Gethro Muscadin, can cook just about anything.

Muscadin embraced the compliment and said he has been cooking for his family since he was 12. Mashburn frequently requests a breakfast Muscadin makes that consists of toast, eggs, cheese and bacon.

Muscadin appeared in 11 games for the Kansas Jayhawks during his freshman year. He said it feels like this New Mexico team has more chemistry than that Jayhawks team.

Mashburn also mentioned chemistry and said the team makes it a point to spend time together off the court, whether its going to the mall, going out to dinner or hanging out in the dorms.

“We are getting along, hanging out and doing team bonding outside of practice,” Mashburn said. “Just checking up on each other and treating it like a brotherhood.”

Francis transferred from North Carolina last season but did not really get to shine. He played in 21 games, 11 as a starter, but in almost 23 minutes a game he only averaged 6.4 points, 2.2 assists and 2.0 rebounds.

“He can shoot the basketball, I do think he’s got a good basketball IQ. For him, it’s been more about staying healthy in the past,” Pitino said. “But knock on wood, he’s been good. He’s had a great attitude, he’s a really good leader. Wants to win, wants to be coached.”

Francis said he lost 15 lbs, which has helped him become more explosive and feel less stress on his knees.