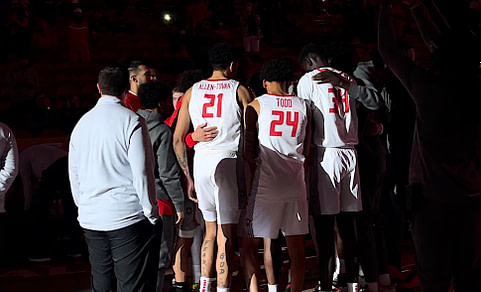 Richard Pitino was not sorry and does not want to apologize.

The New Mexico head coach picked up a technical foul for complaining to officials after Wyoming’s Hunter Maldonado drew an offensive foul with 17 second left on the clock on Saturday night. Jamal Mashburn Jr. got called for a charge as the Cowboys were up by two points. That sealed the deal.

The Lobos had to settle for a 93-91 loss on the road. They remain winless in the Mountain West conference. Meanwhile Wyoming improved to 15-2 overall and 4-0 in the conference. This is the Cowboys’ best start since 2014-15.

“My reaction was appropriate, and I don’t apologize one bit,” Pitino said on the KKOB postgame radio show.

The coach went on to say he felt good about the direction New Mexico is heading with all the improvements despite all the challenges and also what the overall record says.

"My reaction was appropriate, and I don't apologize one bit," Richard Pitino post game on @KKOBradio regarding the charge called on Mashburn Jr.

"I feel so good about where we are going…they are bought in," Pitino on the team responding despite the losses. #Lobos

The Cowboys were up by double digits less than two minutes into the second half, but the Lobos clawed their way back. It was a heated second half with both teams doing well on offense. Wyoming was shooting at 72.7% in those 20 minutes and New Mexico kept up at 65.6%

Wyoming head coach Jeff Linder was impressed with the Lobos and said tonight wasn’t the only time he’s seen them do well. He pointed out how the Lobos competed against Colorado State, one of the top team in the conference, last Wednesday.

“[New Mexico] is a team if you look at their record you might not think the game should be as close as it was, but if you watch New Mexico in the other conference games they’ve played this year they’ve played everybody tough in this league,” Linder said.