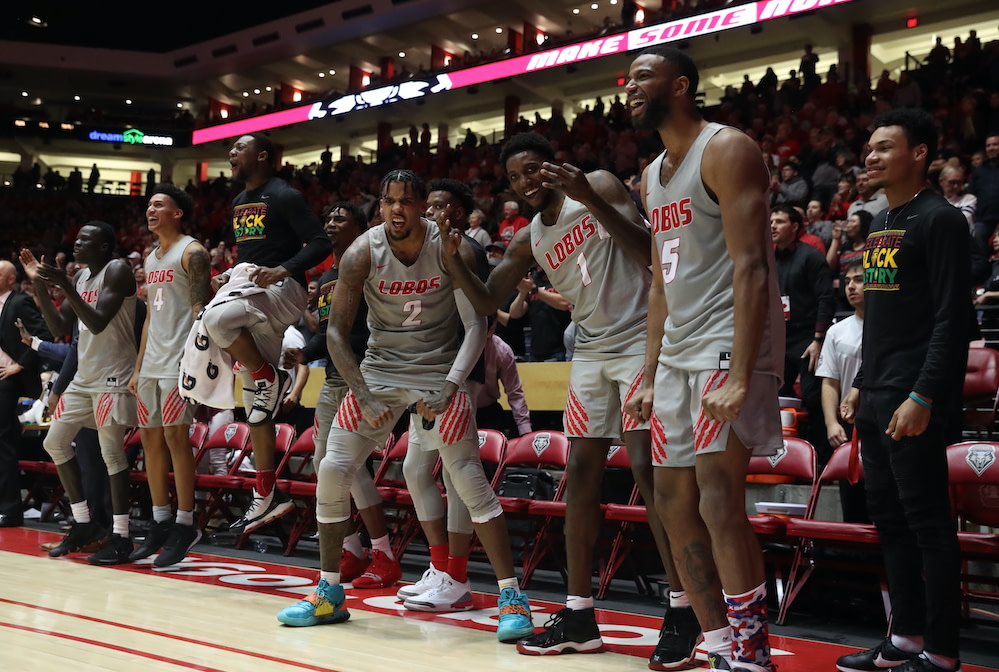 Lobos bounce back with 97-68 win over Wyoming

New Mexico was able to relieve some tension on Saturday as the Lobos snapped a three-game losing streak with a 97-68 victory against the Wyoming Cowboys at The Pit.

The Cherry & Silver didn’t have the cleanest start in the offensive end. The team finally got JaQuan Lyle and Vance Jackson back, but the entire group needed some time to adjust and find a rhythm.

New Mexico shot at 38.2% from the field during the first period going 13-for-34. Wyoming wasn’t doing much better, shooting at 38.5% from the field. Slow offense or not, the Lobos still managed to enter the half with a 40-29 lead.

Wyoming’s leading scorer Hunter Maldonado finished the day with 21 points, but the Lobo defense was able to hold him scoreless until almost 10 minutes into the game.

“Especially the beginning of the game you could see we were just working through a lot of things, guys were a little rusty,” said New Mexico head coach Paul Weir. “Offense wasn’t quite there. Turned the ball over a lot early on, but defense just kept us in the game. We really guarded for the first 20 minutes of the game. As the game unfolded, I think some of those other guys got in the rhythm.”

Jackson hit at three-pointer at the 9:20 mark, those were the only three points he saw during the first period. Things were a lot different in the second half.

The redshirt junior finished the day with 20 points, including a total of six three-pointers that tied a season high. Jackson said not much changed after the break, all he did was remain confident that the shots would eventually go in.

“The first half was a little slow. But my teammates trusted me and I just let it fly,” he said.

Vance Jackson just hit back to back three-pointers. Here is the second one. All nine of his points have come from beyond the arc. pic.twitter.com/hOZ787GcU7

New Mexico registered 12 three-pointers, well above the team’s average of 6.7 per game. Weir has been saying this season that his team is not really a three-pointer team, but there is definitely more comfort now. His team shot threes at 41.4% on Saturday. What made the coach feel good about those shots is that they were inside-out three-pointers and showed that his team wasn’t rushing the perimeter.

Corey Manigault led all scorers with 28 points but also led the Lobos with nine rebounds. Without Carlton Bragg, Manigault is the only true big on the team.

“Knowing I gotta go down there and actually rebound,” he said when asked how his role on the team has changed. “I have an actual job to rebound, so I get down there and do what I have to do.“

Ten of Manigault’s points came from the charity line, where he went 10-for-11. He has been shooting at 67.2% from there this season. During the postgame press conference, Weir laughed and turned to Manigault to say he had been waiting to see his player get good at the free throw line again.

Up next, the Lobos head to California to take on the San Diego State Aztecs on the road for a Tuesday night game.