A New Mexico fan on the stands reminded the Lobos that they were 6-of-21 from the field and only up 14-11 almost halfway through the first 20 minutes against Northern New Mexico, an NAIA team.

Yes, the Lobos won 78-46 on Friday, but the first half was a very ugly performance. It was interesting, especially coming from a team that less than a week ago beat a tough defensive Air Force team.

“We were sleep walking a little bit in the first half,” Pitino said. “I honestly didn’t go crazy at halftime. I just explained to them, if you’re going to continue to mope around when you don’t make shots and not establish some level of defense and toughness and rebounding, it doesn’t matter who we play, we are not going to win at the level we want to win at.”

The Eagles picked up a 7-2 early lead and outshot the Lobos for a good part of the first period, but the Lobos eventually reached halftime with a 32-22 lead. They pulled away in the second half and the walk-ons even got some valuable minutes.

Jamal Mashburn, Jr. led the offense with 21 points. This was the 23rd time he reached double digits this season. Jay Allen-Tovar and Jaelen House followed with 10 points each.

With Friday’s result, the Lobos improved to 10-14 overall. This counted as an exhibition game for NNMC so the Eagles’ record stayed the same (12-3).

Next up, the Lobos will host two tough Mountain West opponents next week — Wyoming on Tuesday and Colorado State on Thursday. Both of those teams are in the NET top 40. 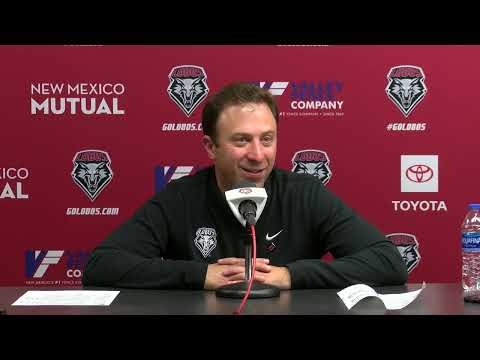