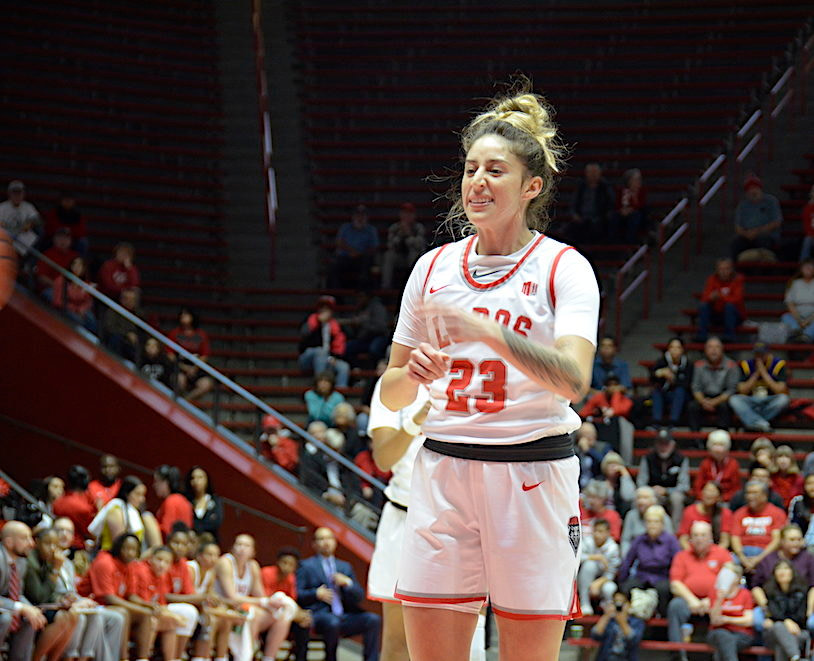 Sometimes the final score doesn’t tell the whole story.  But tonight it did.  In a very fast paced game AT hit a three-point basket 24 seconds in, the Lobos scored the first 17 points, ended the first quarter up 32-8, and never let up on an out gunned Arkansas Pine Bluff Golden Lions.

UNM was led by LaTascya Duff’s 28 points (on 10 of 11 shooting), 7 rebounds, and 3 assists.  And though the Lobo lead was over 30 the majority of the game APB kept running and trying to pressure the Lobos, so the points just kept coming.  All 12 Lobos played and half of them scored in double digits.  Shai had 9, all in the first half, and hardly played in the second half.

While there was no suspense in the contest, there were some reinforced patters—things we will likely see the rest of the season.

This Lobo team can score, averaging 103+ points per game. That will certainly drop as the competition gets a lot harder, but there is no shortage of players to take—and make—shots.  But there is also no proven inside scorer, so on nights where the basket shrinks there can be occasional droughts.  So far the Lobos have attempted slightly more three point shots (102) than two point baskets (100).  Nevaeh leads the Lobos in three point percentage at a perfect 1 for 1.

The offense has been unselfish. The Lobos had 27 assists on 41 made baskets this afternoon, and for the season they are averaging 20 assists, or assisting on almost two thirds of their baskets.  The 20 assists will not stand, but hopefully the unselfishness will.  Jaedyn and LaTora Duff lead the team with 14 assists each.

Post defense will be a challenge. For the second time in three games the Lobos faced a significantly taller but less talented team.  Both times UNM was able to deny and deflect a number of entry passes into the paint, but when the opponent was able to get the ball inside they were able to get a lot of good looks and shots against whoever the Lobo interior defender was.  Fortunately both Midwestern State and APB missed a lot of those short shots.  The better Mountain West teams likely will not.  Because of that, Mike Bradberry broke with his traditional preference to play the defenders behind the opposing post, and moved the Lobo post defender in front on the opponent post, trying even more to prevent penetration rather than contesting the inside shots.  This may change if the three tallest Lobos—Azaria, Celine, and Nevaeh—earn more playing time.

Rebounding will be a team sport. For the season the Lobos are +14 on rebounds, but given the opposition that is not as impressive as it first seems.  Shai McGruder is averaging 8.0 a game to lead UNM, but after that the rebounding has been guard oriented.  Jaedyn in the second leading rebounder (7.3), and then the two Duff sisters.  When three of your top four rebounders are 5’9” and below, that is a concern.

The team has a short Christmas break starting this evening, and then begins conference play with games at Nevada on December 31st and January 2nd.

Catching Up With Jaisa Nunn
A New Branch off the UNM Coaching Tree
Of Beating UNLV, Close Games, and Underclassmen
Women's Basketball 110