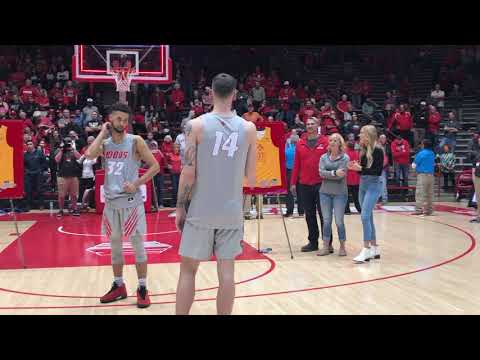 Wednesday’s game was coming down to the last couple seconds and Boise State had the ball. It could’ve easily been a story about how New Mexico blew a first-half lead and picked up another loss.

But senior Dane Kuiper wasn’t going down on Senior Night. He stole the ball and allowed the Lobos to walk away with a 73-72 victory.

“That’s what seniors do. That possession is where experience kicks in,” said UNM head coach Paul Weir.
The coach has talked about how important Kuiper is for the Lobo defense, going as far as saying that he is probably the best defender on the team. Kuiper, who not that long ago was sitting out because of knee problems, said he was just happy he was able to help his team get a good result.

“It felt great that I could contribute something to the team and win a game by doing it. I just saw him holding that ball up and I swiped at it and got it. It’s a great feeling, on senior night especially,” the player said.

The Lobos walked into their locker room at halftime with a 41-29 lead after being up by as many as 13 points. They had made seven three pointers, the same number of attempts the Broncos had. Boise State only made three shots from beyond the arc, but its field goal percentage wasn’t far from New Mexico’s. The Lobos were shooting at 45.2 percent from the field while the visiting team was at 44.8 percent.

The Lobo defense registered five blocks during the first half (only added one more in the second period). This is better than the team’s average 3.6 blocks per game.

While the first period saw a good offense and defense from New Mexico, things changed after halftime. By the 15:13 timeout, Boise State had gone on an 11-2 run. Junior Corey Manigault helped the Lobos out with two free throws after this break, putting the Lobos up by five at 45-40. He would eventually finish the night leading his team with 19 points. He was perfect from the free throw line by making nine of his nine attempts.

The score was tied a couple times with UNM regaining the lead but not getting too far away from the Broncos. As the clock kept running, it was clear the game would come down to the wire.

“I didn’t think the guys that started the game had a lot of pop. We started the same group coming out of halftime and I explained that to the group,” Weir said. “Unfortunately, that group just didn’t have a lot of pep in their step. It wasn’t until we brought guys in that had a little bit more energy about them that I thought we were rolling. And by that time, Boise was on a bit of a roll.”

At the two-minute mark, Boise State’s Justinian Jessup hit a three-pointer to get his team a 72-70 lead. Maluach responded with a three-pointer for the Lobos. New Mexico had a chance to grab more points with eight seconds remaining as Carlton Bragg went to the charity line. His first attempt began going in but then left the basket. The second came up short and hit the rim. Jessup got the rebound but this Boise State possession was when Kuiper stole the game.

Thank you Lobo Nation! Albuquerque will always have a special place in my heart❤️

For Boise State, it was yet another close game that resulted in a loss. The Broncos are now 1-9 in games that have been decided by one possession or overtime. With a six-game losing streak, they drop to an 11-19 record overall and 6-11 in the Mountain West conference.

New Mexico improved to 13-16 overall and 7-10 in the conference. While Wednesday’s result was a positive one, the Lobos don’t have a lot of time to celebrate. The MW tournament begins on March 13, and with the competition being a week away, the Lobos have to learn from their mistakes as fast as they can.

Senior Anthony Mathis admitted his team would probably not get away with periods of low energy in Las Vegas, and therefore the players need to learn to play hard for the two halves that make up a basketball game.

“We have to think of the memories we’ve had, some experiences where we have lost big leads in the second half,” he said. “They (the Broncos) came out and hit a couple shots, obviously, and got that lead down. I feel like we started to panic a little bit, but overall we truly stuck together and just finished it out, which is showing a lot of progress for this team.”

Up next, the Lobos take on Wyoming on the road for a Saturday afternoon match. This is the last game before the MW Tournament in Las Vegas, which begins on the morning of March 13.