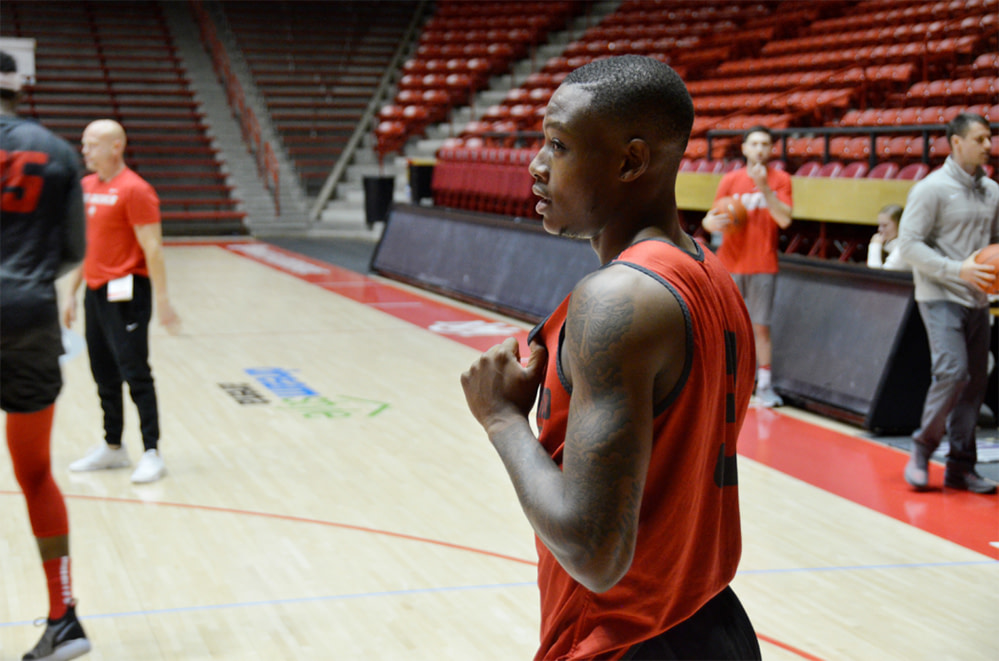 After clipping the lavalier mic to his jersey, Keith McGee began inspecting that it worked properly.

“Can you hear me? Testing, testing. Hello. I got hit in my eye, don’t mind me.” he said squinting, showing off his goofy personality even after a tiring practice.

McGee self-described as a “fun, energetic type of guy” and said his friends would also describe him as someone who is funny, “stupid in a funny way,” and annoying.

Other teammates who are known for their sense of humor, he said, are Corey Manigault and Cartlon Bragg.

During his freshman year, his team team traveled to the 2018 NJCAA Men’s Basketball National Championship. McGee was named the MVP for the 2018 NJCAA Tournament.

The 6’2″ player is one of three Lobos that UNM head coach Paul Weir has been rotating in the point guard position. The other two players are senior Anthony Mathis and freshman Drue Drinnon.

McGee’s interest in basketball began at a very young age.

“The first time ever watching basketball was at my grandparents house when I was two years old. I was watching Michael Jordan,” he recounted. “Whenever basketball would come on, I would stand in front of the TV and just watch it. On my third birthday, they got me a hoop.”

McGee continued his story by saying he played with his kindergarten class and he felt he really stood out. The fact that he was a good player helped 5-year-old McGee decide he had fallen in love with the sport.

Although basketball is his first choice after college, his next choice would be to become a therapist.

“I feel I can give real good advice,” McGee said. “I can’t take it, but I can give good advice. I’m definitely looking forward to doing that if basketball doesn’t work out.”

Other interest outside of basketball include dancing and roller skating. He mentioned the movie Roll Bounce.

Teammate Tavian Percy pointed out that when McGee is not on the court or hanging out with his friends, he is usually in his room. Percy wanted to know what McGee does when he is in there. The answer was probably not as exciting as Percy hoped for.

Dane Kuiper was also given a chance to ask a question. He used it to tease McGee by asking which of his two nicknames he preferred. The answer is “Kuj” but the full explanation of the nicknames can be found in the video below. 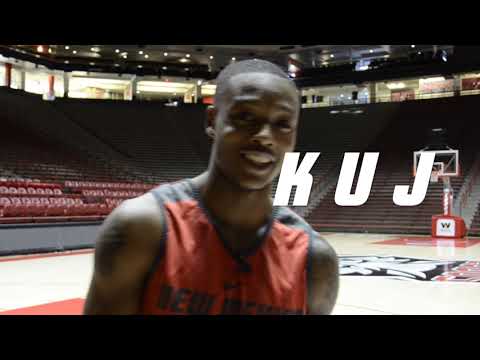 Head coach Paul Weir also had a question for McGee, but this one was basketball related: Why does he jump and pass every single time?
McGee grinned a little bit, knowing quite well that this was something his coach had pointed out before.

“I like to jump. Usually I jump to score or dunk. I feel like when I jump I can see everything, so that’s why I jump and pass,” he explained. “Playing here I’ve learned that jumping and passing will get you nothing but an offensive charge. So I’m working on stopping that, coach.”

When Weir talked more about McGee, he described him as a “lovable, very fun oriented kid.” He said his high energy needed to be toned down a bit sometimes, specially in the point guard position where focus is important.

However, he also said McGee has a “tremendous upside” and “exceptional potential.”