Japan’s B. League resumes games, but with precautions

While the sports wold appears to be shutting down, some are still trying to hold on to some normality.

Former University of New Mexico Lobo and Los Alamos native Alex Kirk is currently playing for Alvark Tokyo in the Japanese B. League, a league that took two weeks off but has now resumed action.

The B. League decided to suspend games for both B1 and B2 divisions as a precaution for COVID-19 on Feb. 26, then resumed on March 14. At the same time the B. League was returning, the NBA and college basketball were shutting down in the United States. 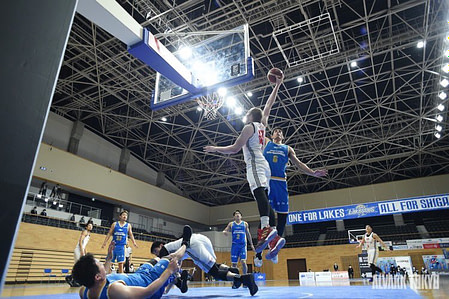 Alvark Tokyo’s Alex Kirk goes for a dunk in front of an empty gym.

“It was morning time when I heard about the NBA and I was on the couch watching the games with former Lobo manager Tyler Pientka, honestly we were both shocked,” Kirk recounted. “But when a player tested positive, regardless of what he did or didn’t do, I think the league did the right thing.”

Players were able to return to the court, but not without a few changes. There is a limit of how many people can be at the gym at a time, fans are not allowed. Players are avoiding big crowds and must really take care of washing their hands. As soon as they get to the gym, their temperatures are checked and they are asked how they are feeling.

Each game is also not guaranteed, as they can easily get canceled if someone appears to be sick.

“Yeah, I heard that some players for various teams have had fevers but I never heard if they were tested or not. But in all those situations the games were canceled,” Kirk said.

The 28-year-old said the league has met everyday about postponing the league, which makes it hard to prepare for games because of the uncertainty. Some non-domestic players have chosen to sit out because they are nervous about the coronavirus.

Japan is trying to get the situation under control as the 2020 Summer Olympics are scheduled to begin in Tokyo on July 24. With the current situation in the world, those games are at risk of getting canceled.

Kirk said it’s important to respect how people feel about the virus and the situations they are going through, even though he himself is feeling safe. He is glad to, at least for now, have the opportunity to use basketball as a nice distraction from everything going on.

Update: On March 17, the league announced they will cancel B1 and B2 games from March 20 to April 1.