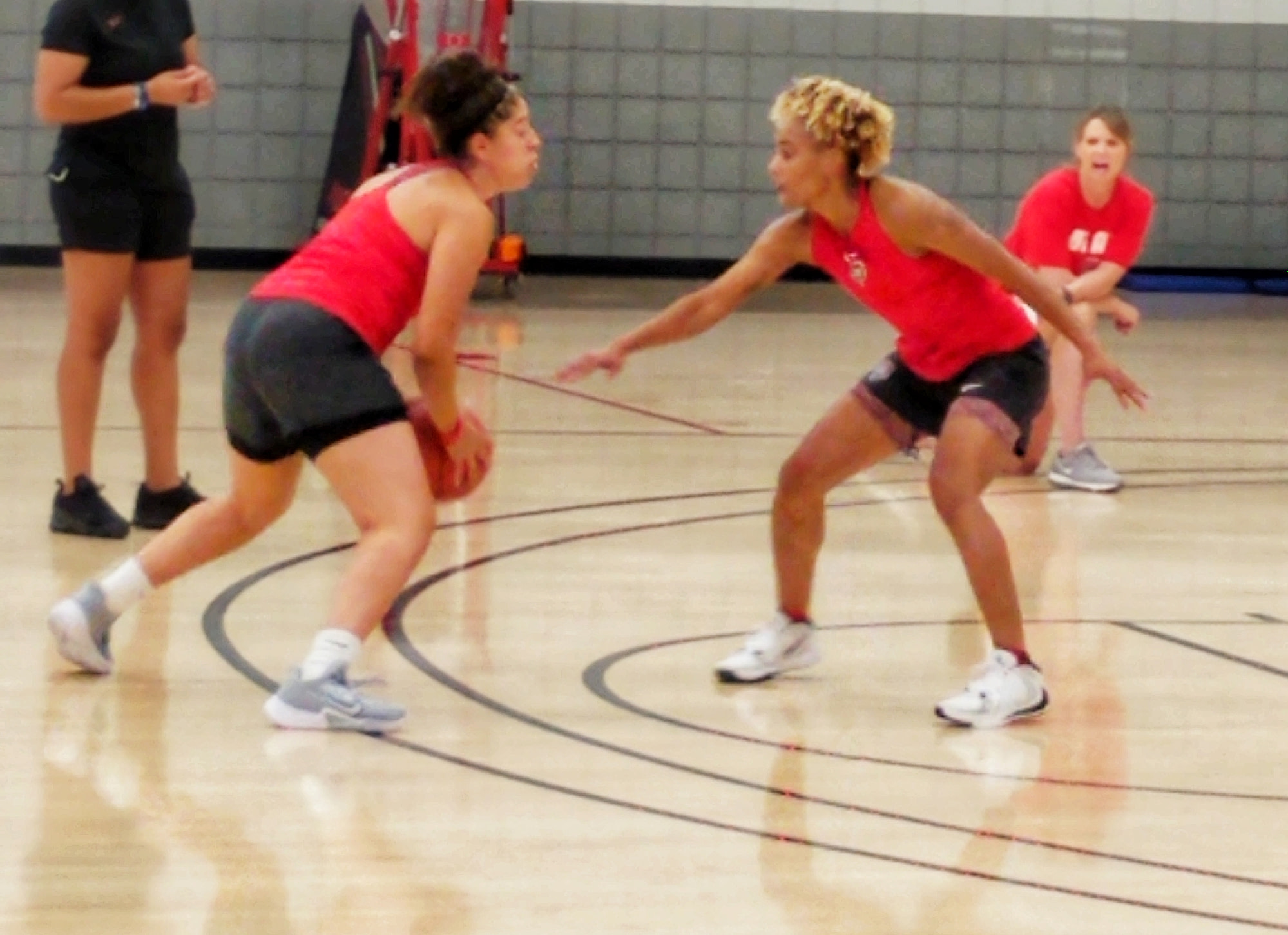 Starting the long road back to a Pit season

It had been a while—well over a year—since being able to do a face-to-face interview with any of the coaching staff.  It seems like there was a lot to catch up on, both last season, the new incoming class, and looking forward to next season.  It had been a relatively simple practice and everyone was relaxed.  Some shooting, a few 2-0 easy pick and rolls, some simple rebounding.  The both things resulted in a conversation more than an interview, and would have been at home with a couple cold lemonades.

Joe:  Let’s start with the same question we’ve talked about for the last several years:  at the end of the season, did last season’s team win the correct number of games?

Mike:  I think we won more.  I’ve talked to Eddie [Nunez] and I talked to Ken [Sickenger] about it, so I went back and I looked two years ago at the Duke men’s basketball team.  I think going into that season you and most people would argue that it was one of the best men’s basketball teams.  In their ACC schedule, they went 4 and 5 on the road.  Then I looked forward at our season and knew we had to play every game on the road.  Also, they went 4 and 5 on the road but were able to came home in between.  So then I figured that if Duke would go 8 and 10 in a situation like ours–and they were arguably the best team in the country that year–what would be realistic for us?  We never get to come home, and every game is on the road.  So I said, “Ken we have 20 conference games, what’s our record?”  Now remember, Duke would have been 8 and 12.  So we agreed on 4 and 16.  That’s the best way to answer.

Joe: And you had minimal practice time.

Mike:  I left that out, too.  Duke gets to practice and we didn’t.

Joe:  This year you have a very different situation.  You are going to be playing here, we hope, and you also have five presumed starters coming back.

Mike:  Then after that, zero experience.

Joe:  How do you look at this summer and plan it:  you have the same amount of time you have always had, but a lot more work to do.  Last summer (and during the season) you didn’t get to practice team defensive schemes at all, because you didn’t have a place to practice.  So you have basically three players who have practiced your defensive ideas.  The rest of the team is new. How does that affect how you plan the summer?

Mike:  Because the three international kids won’t get here until August, I don’t want to get too much scheme stuff in till they get here.  We would just have to do it again and it gets boring to the ones who have already been doing it.  I don’t know how much of that stuff we’re going to do.  We are going to try to get the offence fine-tuned and catch them [up quickly maybe with some extra time and things like that on their own.  Then when fall semester starts, I think we’ll get started. That’s my plan.

Joe:  Plans are plans, they change.  You mentioned international students.  You didn’t get to actually see them, though you’ve mentioned there is an intermediary recruiting service. But that doesn’t tell you about them off the court and in the locker room. So how do you decide which ones to go after?

Mike:  It’s just like any recruiting service.  We don’t use a lot of them. We get one international ones, and one or two national ones, in the United States.  Then one in Texas or one in California, the places we recruit a lot.  I would call them and say, hey, we are looking for whatever (like I need a post player or a point guard).  All they do is send you videos of people who they think would fit whatever I describe.  Then you just watch them and watch them and watch them.  When you like one, you have to call them back.  You get contact information and when you get that, those recruiting service people are out of it.  From then you’re just talking to the kid, like we would do with anybody.

We have a series of questions that is pretty extensive.  We want high quality character, that’s really important to us.  You’ve seen over the last year or so that we pay attention to this.

Joe: I would imagine that’s the hardest thing to tell.

Mike:  It always is and that doesn’t mean that you’re going to get it right.  You try.  We ask them tough questions like, “How are you going to be–what kind of teammate are you going to be–if you don’t get to play?  Or if you don’t play as much as you want to?” Things like that. They could lie to you, but you try to figure it out.  Hopefully the ones that would be upset about that would say so, because they don’t want to be in that situation either.

Joe:  Will there be a greater emphasis to get some of those new players up to the point where they can contribute early on?

Mike:  Absolutely, they’re going to have to.  At least four or five of them.  I think we can get there.  We are challenging the older ones, “You’re going to need them, so you had better help them get caught up pretty quickly because you’re going to be the ones wanting them to be good”.

Joe:  Talking with AT briefly today.  She’s convinced she’s going to be back for game one.

Mike:  Boy, I hope she’s right. I have my doubts. It’s supposed to be a lengthy rehab.

Joe:  I was surprised to see her doing as much as she was out there today.

Mike:  Yeah, that just happened. She does her rehab.  Dre does a great job with them.  We don’t get daily updates, usually every two weeks or if something is about to change with her progress.

Joe:  Going back to last summer, you obviously had to do everything differently.  Are there things you look back at last summer and say, “I was forced to do that, but that actually was a good thing.  I want to keep that going forward.”?

Mike:  I’m glad you brought that up.  I think coaches are trying always to block out distractions.  You don’t want people walking in and out of practice or slamming doors.  Well, we embraced everything.  We were practicing in gyms that had no lights, using the sunlight that came in through the window.  It was either 90 degrees in there or 40, it was whatever there was outside is what you got.  We just embraced everything.  We talked about it almost daily, “It’s just us”. They still say it today.  It’s just us.  There may not be a fan, it’s just us.  We just embraced everything, knowing that at any time it could be called off or we can decide to quit.  We saw it all over the country:  if a team wasn’t good enough they just quit.   But you didn’t see any top 25 team opt out.  You didn’t see one team that was any good opt out.  Every team was at a losing rate when they quit.

To answer your question specifically, nothing is going to bother me or us this season. We almost welcomed it like last year, that everything could be going on and we wouldn’t turn around and look.

Joe:  How do you take that from your returning players and instill it into the new players who haven’t gone through it?

Mike:  I think we’re just going to do it.  I don’t care who comes in the door.  You can sit over there and make noise, do whatever you want to do, I don’t care and they don’t care.  These poor kids have been without their fans which you know that’s the only reason they came because we have such great fan base. They have been without all of that.

Joe:  How do you convey that, especially to the foreign players:  “Here’s the environment you’re coming into”?  Because there are some players who get shell-shock by that kind of environment. Most want it, but there are some who have not come to UNM because of that environment.

Mike: Yeah, those wouldn’t come here.  That’s what we sell–we show our pictures of our games and on Zoom.

Joe:  Looking forward, you didn’t add much height to the roster, however the physical stature of the freshmen is very different.  You have been rebounding challenged since, Jaisa and Nike left. Do you anticipate the same?

Mike:  There will be a deficiency rebound.  But here’s the way I look at it:  it’s about total number of possessions.  I don’t have the stats in front of me, but if you’re plus/minus rebounding is less than your turnover margin, you’re still getting more possessions than the other team.  Where everybody likes to get us is that we can’t rebound—but nobody ever says that we also almost never turn it over.  So, we are always on the plus side when you combine those two which are the only two stats that determine the total number of possessions.  So, yes, I would be shocked if we were not negative rebounding, and more shocked if we are not positive in the turnover ratio.

Joe:  You’ve got one point guard who didn’t turn the ball over very much at all last year. Are you counting on the Hungarian player [Rebeka] to be a second point guard this year?

Mike:  We’ll figure it out.  I don’t know yet.  La’Tascya and Jayden have played point guard in the past, in back-up roles so I’m not worried about point guard play.  We’ll find out about Anaya or Rebecca, how quickly they can get in that mix.  We’ll see.

Joe: How is the schedule coming along?

Mike:  It’s done.  We just don’t have all the contracts–we have about 7 or 8 of the 13 non-conference game contracts back.

Joe: What is the current status of fans when you start games? Do you know?

Mike: I don’t. Somebody probably does but I don’t even ask.  They will tell us.  I don’t know why they couldn’t.  The Rangers sell out every game and have been.  There will be 100,000 in every SEC stadium every single Saturday during football.  I would hope that people would want to do something and I think they will show up.  I think we have a good team.

Joe:  As always, thank you for taking the time to talk.

Shaiquel McGruder is coming back to New Mexico
Lobos outrun NMSU at the Pit, 83-58, behind a team effort (and Aisia's 23 points)
Of Beating UNLV, Close Games, and Underclassmen
Women's Basketball 110