Football: Raising the line of default

Head coach Bob Davie and the Lobos approach summer goals in terms of the line of default.
“We all have it,” Davie said. “What causes me to default? Default is where I can’t fulfill a commitment, I can’t fulfill an obligation. I melt down, cave in. I lose control of the outcome because I default.”
The New Mexico coach began this week’s press conference with a statement that recapped the misfortunes the Lobos encountered last season. Last summer the most asked question was who Davie would select as his starting quarterback. That ended up not mattering due to injuries that eventually lead to the Lobos eventually relying on their third-string quarterback. The team also suffered injuries in the defense, including linebacker Alex Hart and defensive lineman Trent Sellers.
Davie admitted the team did not respond well to all the obstacles and it ultimately led them to a poor record. But regardless of what happened last season, Davie said he is feeling good, and that  this has been one of the most positive offseason he has been involved with.
“I think we’ve built this back up,” he said. “We have some talent and there’s reason for optimism…. We talk all the time about how our team gains will come from individual gains starting with how you take care of your business in all facets of your life.” 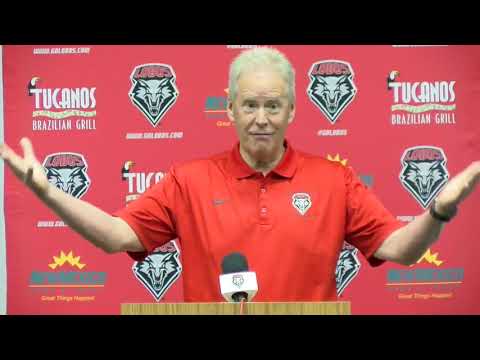 New Mexico officially starts its season on August 31 with the Lobos hosting Sam Houston State. The Lobos are very likely the favorites to win this game, but that’s not something Davie wanted to hear or talk about.
“Don’t even go there,” he said. “There is not a team looking at our schedule and saying they are themselves going to be the underdog.”
Davie definitely can’t relax during that game, not just because it’s a season opener or because history has shown the Lobos don’t always live up too predictions. That will be their only game before taking on Notre Dame on the road as their second opponent of the season, not a small challenge.
‘It seemed like a much better idea five years ago,” Davie laughed a little. “First time I’ve gone back and coached there against Notre Dame in that stadium.’
The team definitely has their fair share of things to work on, and that work starts soon. The Lobos are approaching the end of their summer break and will begin camp this Friday starting at 10am and going until 12:30pm. Quarterback Tevaka Tuioti might miss the beginning of it due to his grandfather’s health condition. Tuioti and his mom are currently visiting the hospital.
Mountain West football set to return Oct. 24
Lobos travel to Las Cruces for Rio Grande Rivalry game
Eddie Nuñez gives statement on the future of Bob Davie
Football 64