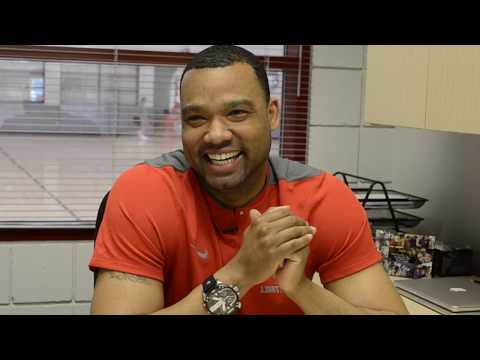 Assistant coaches in college basketball play an important role in bringing talent to a program. At UNM, Brandon Mason is one of those key pieces for recruiting. But although his job is serious, his personality is usually not.
Mason constantly goes on Twitter to tweet about “high fives” and positive “energy” while continuing that same persona in real life by going around the athletics office and giving people high fives.
“I just believe in smiles and creating positive work environments,” he said “that’s what I’m big on.”

Mason moved from Chicago to Las Cruces to play basketball at New Mexico State from 1999-2003. His experience in the state began as an Aggie, so when asked if he ever thought he would end up at UNM, he said it never even crossed his mind. After playing for NMSU, Mason went on to play professional basketball both in the United States and overseas. This included some time with the Albuquerque Thunderbirds and the 2006 NBA D-League Championship.
His current position is not the first job he’s had with the Lobos. Mason spent two seasons as a video coordinator under Steve Alford.
“I like to say that the video coordinator position is like the entry level job of coaching, getting to know your role and understanding the program,” Mason said. “When I finished playing professional basketball, I thought that I knew basketball. And then once I got here and got to do video and work for Steve Alford, I got to realize that I didn’t really know too much about basketball. I learned a lot.”
After UNM, Mason took what he learned and put it into practice at New Mexico Highlands, his alma mater NMSU, and most recently UNLV.
With all the time he has spent with basketball on this side of the country, Mason said he feels like he is a “complete New Mexican” and doesn’t even really claim Chicago anymore. His favorite part?
“Probably my family,” he smiled. “But green chile ranks pretty high.”
As a father, Mason spends a lot of time with his children. He constantly posts videos of them working out and even practicing basketball at Lobo facilities. The sport is something that brings them together. But not all their hobbies are basketball related. The Masons also like shoes.
“I’m a huge shopper, I love to shop,” Mason said. “I have a collection of Jordans and different things that I’m big on. I try to get my kids the same kind of style of shoe. They love it, they look forward to it. We clean our shoes and kind of take pride on that a little bit.”
But if he plays hard, it’s because he’s works hard. The UNM men’s basketball team recently announced a couple new players committing to the program including Karim Ezzeddine, Keith McGee and Tavian Percy. The job of recruiting is important but it requires a lot of the work to be done behind the scenes.

“Until you can get something done you kind of don’t want people to know because it actually creates competition,” he explained. “You kind of want to slide under the radar, get some stuff done without anyone hearing about it. But when it gets out there, like oh we are recruiting such and such, the Tweets start going and other schools see it and now you are competing and it’s all out of wack.”
Mason said that he has realized how dedicated New Mexico fans are. They don’t just attend games, they follow every aspect of the program quite closely and it’s clear “they do know basketball,” he said.
He also added that he is sometimes surprised at specific questions fans ask him because he doesn’t even know how they could’ve gotten that information. What he finds even more interesting is how fast news travel.
“I don’t want to say exactly what happened, but a few times I was just like oh my god I can’t believe that got out. It’s pretty cool though. Times have changed,” Mason said. “Years ago, back when I played, there wasn’t really social media. The biggest social media back then was probably MySpace. It was just starting.”
“Old!” joked the basketball sports information director from across the room.
“MySpace was just starting,” Mason laughed and continued. “Besides that, I don’t have Instagram or Facebook or any of that kind of stuff. I just stick to Twitter just so I can get the instant updates.”
Mason said he enjoys his job right now and that he was very grateful for the opportunity Paul Weir is giving him. However, Mason is determined to go as far as he can in his career. Just like his previous position as video coordinator, he sees this as a stepping stone to his dream job. When asked where he sees himself in ten years, the assistant coach didn’t need much time to think about it.
“In ten years I’ll be a head coach of a university,” he answered. “Hopefully sooner than 10 years.”