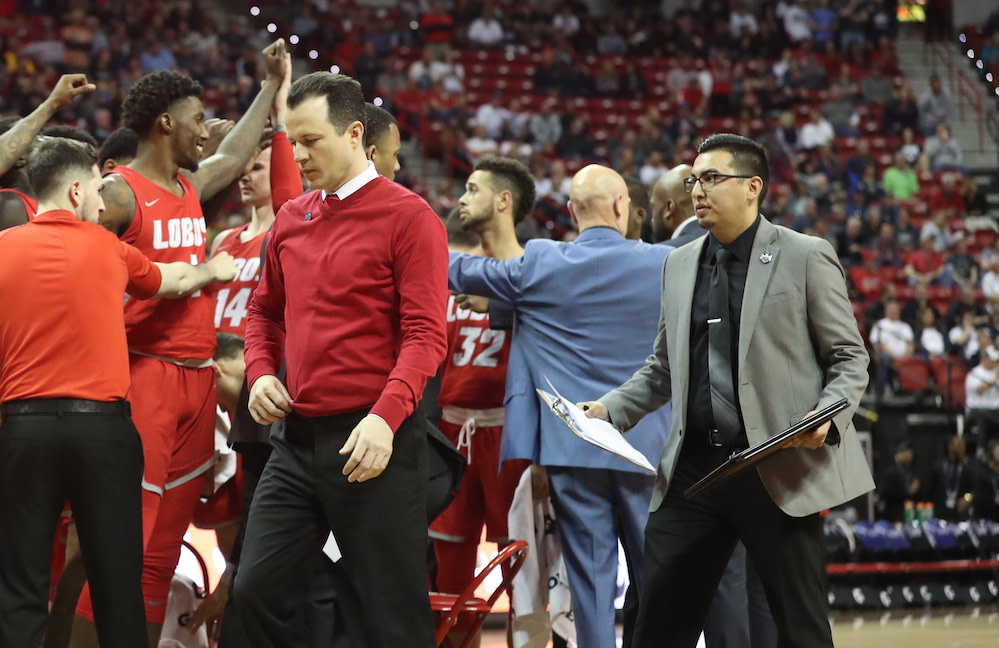 New Mexico native Estevan Sandoval spent the last six years on the court for the University of New Mexico men’s basketball team, although he wasn’t a player. He did everything from killing mice to scouting opponents. He has been doing whatever it takes to get himself ready for his dream job, which he decided early in life.
“My dad has been a high school basketball coach for as long as I can remember. I’ve been in a gym since I can remember, just with him being a coach all over Santa Fe,” Sandoval recounted. “I was always at his practices, always at his games…I knew from a very young age that I wanted to be a coach.”
The former UNM student played basketball growing up, but he didn’t think he was strong, fast or tall enough play at the college level. That didn’t matter to him too much though, because his love for the game was mostly about the people and relationships. Seeing the impact his father had on kids’ lives was one of the biggest things that inspired him to pursue a coaching career.
“I could see it in his eyes, being proud of those kids,” Sandoval described the experience of seeing his dad run into his former players. “I’m a competitor, but it was that feeling of seeing his players succeed in life and seeing him proud of them for that, that feeling alone is what kind of intrigued me and took me down the path I’m on.”
Sandoval’s first step into a college basketball career was four years as a student manager under Craig Neal. After his undergrad, he spent two years as a graduate assistant for Paul Weir. Those six years of experience taught him a lot about hard work and being part of a team.
“It’s obviously a very thankless area, being a manager and graduate assistant,” he said. “They are the first ones there, the last ones to leave. Rebounding, laundry, literally I killed mice as a manager because we had a mice problem one year in the facility. That kind of stuff is what you are doing. Literally all of the dirty work that nobody wants to do, mostly as a student manager. Taking players to events, a doctors appointment, just the little things like that that play a big role in the long term and bigger successes of the team.”
Being part of the college basketball world isn’t as glamorous as others think it might be, but Sandoval said he learned a lot in New Mexico and he feels ready to branch out to see where his career goes. This August he officially started a new job as an assistant coach with the Gillette College Pronghorns in Wyoming.

Sandoval is not yet at the point of his career where he sees a lot of camera time. However, decided to study not just the game of basketball but also how coaches interact with the media because he believes it’s important to be efficient at getting messages across. He watches a lot of press conferences and looks up to coaches like University of South Carolina head coach Frank Martin who are not afraid to speak honestly.
Under Weir, Sandoval spent a lot of time watching games and video clips to help with scouting teams and individual players. Part of his job was studying the last eight games of teams the Lobos were going to play, as well as having a full report on the Lobos’ last game with their next opponent. He admitted he has watched more basketball than he ever thought he would, but the experience has been valuable because he sees basketball as a game that requires a coach to know each player’s individual strengths and weaknesses.
“I think creating a relationship is more important than creating a broad network. I would rather have one good real relationship than a hundred fakes ones,” Sandoval said. “Really getting to know people doesn’t happen in one day or two weeks, it happens over time. It’s fun for me. I think that’s what attracts me to coaching, putting all the pieces together of one group, finding the right fit for everybody and where they fit into the team.”