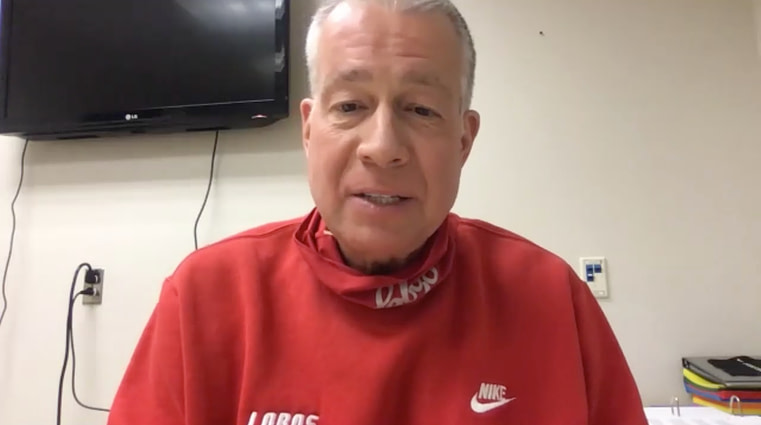 Dave Pilipovich was well aware of The Pit the first time he visited as the Air Force head coach. He knew the arena would be loud and his players were anxious to walk down the ramp. They were supposed to go behind the Lobos, but Pilipovich had a different plan.

“I said, ‘I’m not real smart, but I don’t think those fans can boo and cheer at the same time,’ ” the coach laughed. ” ‘They’re going to be cheering for the Lobos, and we are going to sneak in right behind them.’ ”

Pilipovich was with the Falcons from 2007 to 2020. He was an assistant coach for five years before becoming the head coach. He wore blue for a long time, but now he’s wearing red.

He’s not the only member of the current UNM staff who was previously the head coach of a college basketball program. Before heading to New Mexico, Dan McHale was the head coach at Eastern Kentucky, Scott Padgett at Samford University and Ralph Davis at New Mexico Military Institute. Some people could be worried about too many cooks in the kitchen, but not Pilipovich. He thinks the experience everyone brings is going to create something special.

“We all have different ideas from where we’ve been and we can put those together and that’s a neat thing,” he said.

As for him specifically, he thinks his experience competing in the Mountain West conference will add to the value of his contributions.

“Experience with the conference, some of the styles of play of the coaches who are in the league, players in the league. Even little things like travel,” he explained.

Pilipovich said the main reason he chose to take a job with the Lobos was the good relationship he’s had with head coach Paul Weir since he was coaching in New Mexico State. He likes Weir, but he has also liked the cherry and silver program for a while. He said it’s clear that there is basketball tradition and has always considered the Lobos a team that can’t be taken lightly. He mentioned players like Tony Snell, Kendall Williams and Alex Kirk. One of his all-time favorites is Hugh Greenwood.

“I’m a fan of his. Just how hard he played and what a great leader he was on the floor,” he said.

Pilipovich hasn’t spent that long with this roster yet, but there is one player he has heard and seen quite a lot of: freshman Javonte Johnson who came to the Lobos from Cheyenne Mountain high school in Colorado Springs.

Johnson was a standout there, finishing his senior season with an average of 30.0 points and 10.2 rebounds per game. Because Pilipovich was also in Colorado, he was able to get to know him and watch him play. The coach didn’t like the idea of having to play against him in the MW if he were still coaching at Air Force.

“Now I’m glad we’re wearing the same uniform,” Pilipovich said. “He’s really developed and grown since I last saw him which was probably last February, so really excited about him. And what a super person he is.”

The newest member of the Lobo coaching staff is already happy with his new home. It’s not just the fact that he is close to Colorado, his new state also has a lot of good food, which he admitted has been one of his favorite parts.

The announcement of Pilipovich’s hiring as special assistant to the head coach came out less than a week ago and of course his phone was immediately flooded with messages from former players, former coaching colleagues and other coaches in the conference. All were positive, sometimes with a hint of friendly teasing because of the new color of his wardrobe. Pilipovich appreciated the support and has fond memories with the Falcons, but he is also excited to embrace the cherry red, and most importantly, the fans.

“If you see me around, please stop and say hello. I love to meet people and want a chance to know as many Lobo fans as I can,” he said.