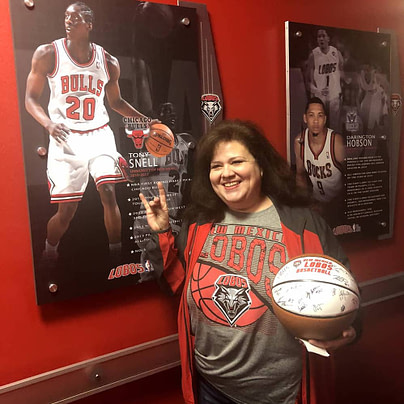 The nickname came from the need of a Twitter handle and a t-shirt she found online. It stuck and now Susan Berg, aka the Crazy Lobo Lady, is somewhat of a celebrity in the New Mexico Lobos world.

Berg’s first taste of notability was when she had her previous nickname, the Crazy Cookie Lady. There was not much to it. Berg went to tailgates and brought cookies. Lots of people bring dessert to gatherings, but her cookies were cool looking and delicious enough to grab the attention of recruits who were in town visiting UNM.

She has a lot of stories, but her favorite one is how a young Anthony Mathis with a mouth full of braces introduced himself to her to ask if he could grab more cookies.

After that one occasion, Mathis made it a point to come to football tailgates for the cookies. Berg likes to joke that Mathis decided to become a Lobo because he liked the cookies so much. 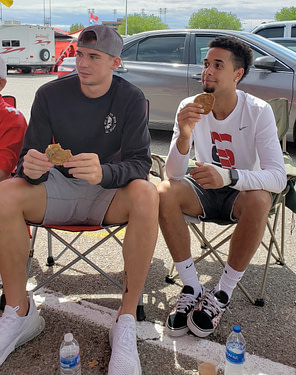 Unfortunately, cookies were not the reason Berg appeared on the local news.

Four years ago, Berg got a 17-pound kidney tumor removed. It came back and metastasized to her pancreas and lung.

“All of a sudden I felt just horrible and I didn’t know what was going on. I was supposed to have my third infusion that day,” she recounted. “I just wasn’t feeling good. I came in on Saturday, they wouldn’t do anything, they wouldn’t even draw my  blood. They said, ‘well it’s taking a while for your liver, we have to see what’s going on.'”

The doctor informed her she had gotten hepatitis as a side effect from the medicine she was taking. This meant she was done with cancer treatments until her liver healed. She almost got hospitalized three times that week.

“It’s something that’s always in the back of your mind even though you are trying to be positive,” she said. “You always wonder what is going on in there. You want another CT scan even though it’s not time for another CT scan because you are just curious to see if it’s gotten bigger, if it’s gotten smaller, where it stands now. It doesn’t help that you are not sleeping.”

The day after the doctor told her the news, her friend JJ Griego called and asked what she was going to do. That’s when it hit her that she didn’t know, perhaps she would refinance her home again. That’s when Griego decided to create a GoFundMe account for Berg.

This was way outside her comfort zone. Her mother raised her to always do things herself and never ask for help. Everything that happened next is still feeling like a dream.

Lobo nation stepped up and helped raise money for her treatment. But she was most overwhelmed at all the support from people who she didn’t know very well, some whom she didn’t know at all.

When New Mexico head coach Paul Weir heard her story, Berg was invited to meet the Lobo men’s basketball team during a practice. Berg went behind the scenes, she called it her Disneyland.

What a day! I was in MY Disneyland! I had never been back there! pic.twitter.com/fdCl5Qm9d1

She said a lot of the players already knew about her and she couldn’t have felt any more special. One of these players was JaQuan Lyle. Before that practice, he had reached out to tell her that the team was not going to give up on her. Berg keeps that message close to her heart, and she made sure he knew that when she talked to the team during their film session.

“I said ‘I will be at the Mountain West Conference. I don’t expect you to give up on me and I won’t give up on you.’ Of course I was crying, and he had this big ole smile on his face because he knew I was quoting him,” she recounted. “He doesn’t know how much that means to me.”

Weir checks in occasionally and has even invited her to games, which she gladly attends when she is feeling strong enough.

But why is a college basketball team so important to her? Because it’s not just about basketball.

By following the New Mexico team closely, she has formed a good group of friends and explored places she never thought she would.

“We didn’t win a single game in Hawaii, but we were in Hawaii for god sakes,” she recounted the story of one of her trips with an excited smile. “That was awesome. That was something we planned for two years. It was our tight-knit group. My husband ended up catching a 300lb blue marlin.”

The whole time during this experience she has constantly asked herself “Why me?” But it isn’t about why she got sick. Her question is about what made her deserving of all the good things that are happening to her during a tough time in her life.

New Mexico basketball and the community that comes with it has given Berg something to look forward to.

“The first thing that came to my head was ‘I want one more basketball season.’ It’s a weird thing to say,” she said. “You get told that you have stage IV cancer, you could die, most people say ‘I just want to make it to Christmas.’ I just want one more season, one more Mountain West Tournament.”

Nothing was going to stop her from a trip to Las Vegas in 2020. Absolutely nothing.

Here is a photo of her at this year’s tournament. Her hands hold a New Mexico flag and her face wears the biggest smile in the arena.

Susan Berg’s goal was to feel strong enough to make the trip to Las Vegas for the 2020 MW Tournament. Here she is proudly holding her flag.

Update: Since the interview, Berg found out her cancer doubled in size during the two months when she couldn’t take the medicine while her liver healed. She will be going to Mayo Clinic in Arizona to have it surgically removed toward the end of March.