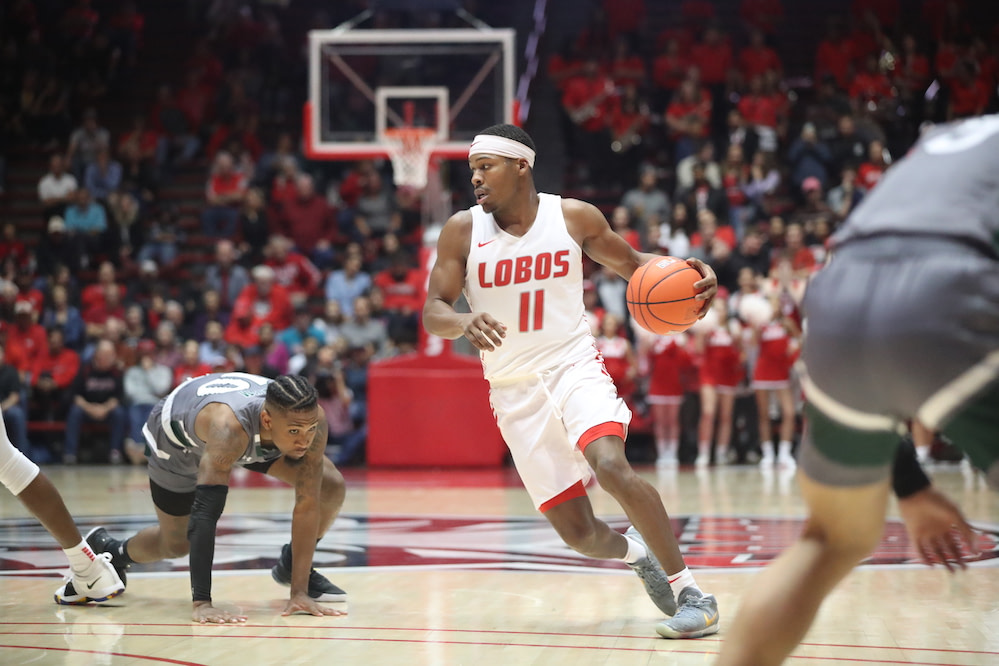 The University of New Mexico coaching staff hosted an online basketball clinic on Saturday morning with over 70 attendees. The clinic focused on different aspects of coaching, one of the most important topics being what makes a player recruitable and valuable for a team.

When it comes to his team, head coach Paul Weir likes to focus on improvement and growth. He has a PhD in Educational Leadership and likes to see players making well-thought-out decisions on the court. While he knows not every player will always have it, he explained how valuable players with high basketball IQs can be.

Weir spent the part of the virtual clinic breaking down film and showing what made certain players earn their time on the court. He said Makuach Maluach and JaQuan Lyle were essential last season because they knew defense and could fill gaps when teammate made mistakes.

Hearing his coach say this would probably put a smile on Maluach’s face, as the junior had said his goal is to become one of the best defensive players in the league.

For the offense, Weir once again mentioned Lyle. He also talked about point guard JJ Caldwell, who was suspended indefinitely late December. Losing Caldwell was painful for the team since Weir said he and Lyle were the two best players at making reads to help create scoring opportunities.

A high basketball IQ is not something coaches test recruits on, but they do try to evaluate potential incoming players as much as they can in different areas.

The UNM men’s basketball recruiting sheet includes five categories in which the coaches evaluate a player’s skills as “below our level,” “at our level” or “above our level.” This is based on how well they believe a player can compete in the Mountain West Conference.

Assistant coach Brandon Mason went over all five and talked about Lobos, past and present, who represented each skill.

Foot speed – Antino Jackson
“He played some really big minutes for us and his foot speed was incredible. He helped our press with his back flow and the way he would be able to tip the ball from behind you. He created a lot things for us in that manner.”

Length – Makuach Maluach
“His length is incredible. The way he can chase down guys and get the block from behind. The way he can get his hands on balls and get a ton of deflections and just use his length and activity.”

Shooting Ability – Keith McGee
“A year ago he shot over 40% from three. He is capable of making like five or six threes in a game. We like to find players who can really shoot the ball because we like to play fast.”

Lobos going around the Wyoming defense and Keith McGee hitting his third 3ptr of the day. pic.twitter.com/nuc90KsOwx

Motor – Sam Logwood
“In year one, Sam Logwood created so much intensity for our press by just his energy and his motor. When the ball went through the basket he would be waiting for them to inbound the ball and he’d be chasing, trapping, hitting back, stealing the ball. At the end of the day, a kid with a motor is definitely hard to find.”

Good Teammate – Joe Furstinger
“He did everything that was needed for our team to keep us together. In the locker room, on the bench, he would call out guys and hold them accountable just like we would. That leadership that he brought was big for us.”

Mason said head coach Paul Weir came up with the system a while ago but the sheet looked different from what it does today. It is still a work in progress and as the coaches continue to use it they add more categories.

Skills are not the only thing they take into account. They also have sections for medical history for possible physical limitations and concerns (short and long term), academics to see if a player will be eligible or what needs to be done, and parent information to see if maybe a player comes from an athletic family or even just how involved they are in their lives. Parent information is the newest section.

At the bottom there is room for comments for coaches to write how they feel about a player and if they think they would be a good fit.

Once the assistant coaches come up with a list of their top players, Weir can start making a decision on who the Lobos should pursue. He can spend 30 to 40 minutes on the phone talking to those recruits with a series of questions that help the staff get an idea of a player’s mentality.

Weir said the staff doesn’t always go for the highest ranked player in their short list. Once it gets to the final part of a decision, the coaches focus on who will fit in the best with the program’s mentality and style.