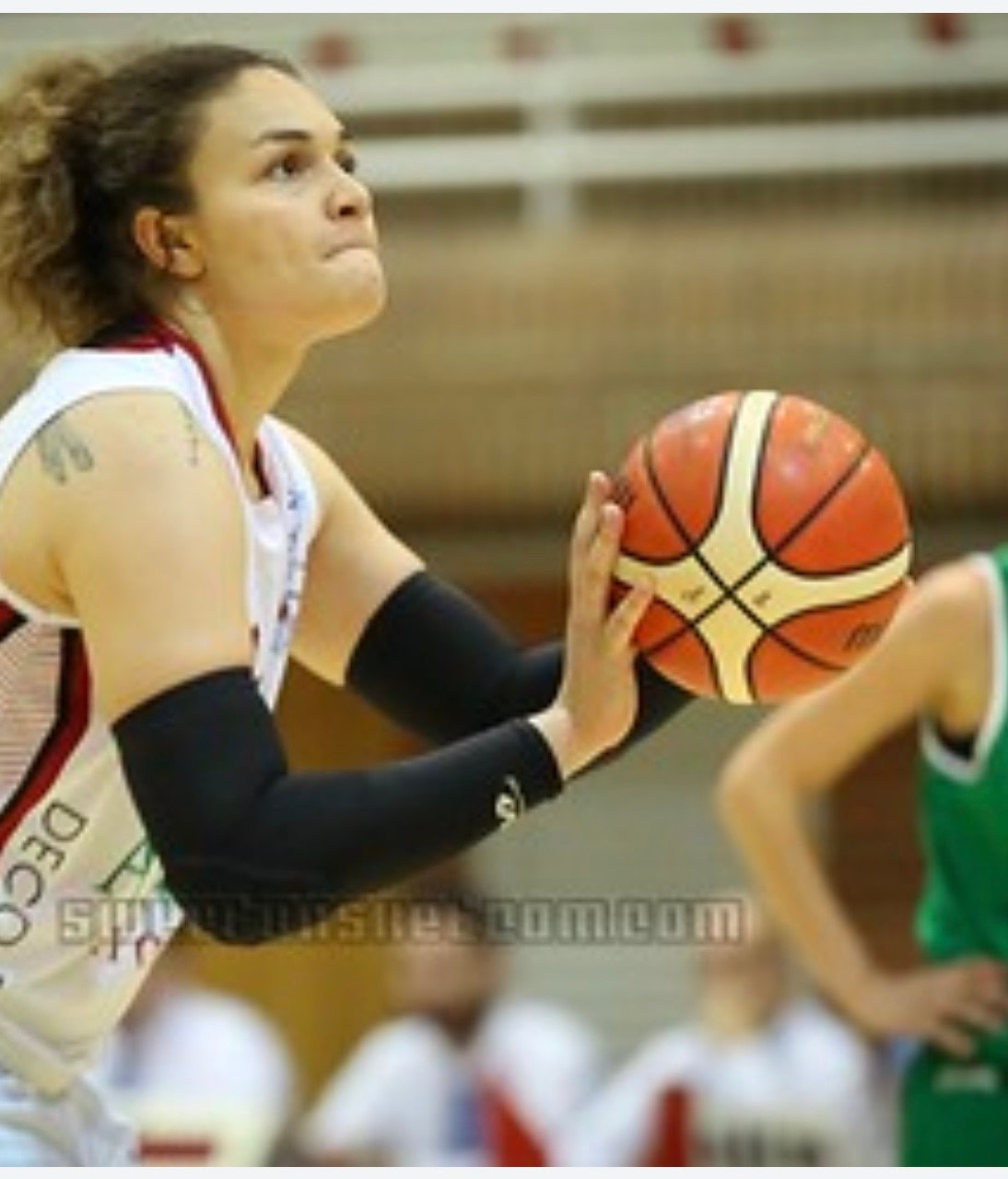 Catching Up With Jaisa Nunn

With the 2019-20 season over for the Lobos, I plan on trying to catch up with some former Lobo players. The first one was an easy choice.  Jaisa is playing professionally in Spain, and the time zone difference made the interview a bit more challenging–but she was exceedingly cooperative and we managed to get it done in spite of my not flying over to do it in person.

The photos are courtesy of the team through Jaisa, and L. Garcia whose photography can be seen on Twitter as @lgarcia_69.

Joe: Jaisa, you are back in Spain for another season. Every time there is a post about you from the team there is a flurry of fans passing the information around and being happy for your success there. Thank you for taking a few minutes to do this interview.

I would like to start with some of the basics. You are playing for Añares Rioja Iraurgi, a team in the Spanish League. Does that mean all your opponents are all other Spanish teams? Is it a regional league, or do you travel all across Spain?

Jaisa: Añares Rioja Iraurgi is a team in the second division the Spanish league. Our home court is located in Azpeitia, Spain. I play all of the 2nd division teams all in Spain. I do have a chance to travel across Spain, places like Madrid, San Sebastián, and even Vigo which is located right near the Portugal boarder.

The team is actually based in Azpeitia Guipuzcoa, Spain, which is in Basque country. Basque country is like the countryside of northern Spain. It’s its own region, with its own language and culture. Azpeitia is about 50 minutes from both Bilbao and San Sebastián. I am also about an hour and a half from the French boarder.

Joe: What have been the biggest adjustments to living in Spain? Language? Food? Other? (Have you been practicing your paella making?)

Jaisa: The biggest adjustment would be first the language and culture. Although everyone speaks Spanish, their 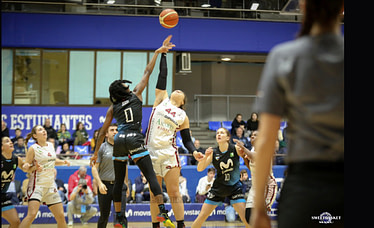 main language spoken is Basque–a language I was completely clueless about when I first stepped in the Basque Country. It sounds nothing like Spanish, so I was struggling a lot trying to understand conversations between most of my teammates. Culture was also a huge shock to me because in the US ever one is pretty much going at a fast pace 24/7. Things such as meals, activities, and work, most are on a time schedule and is going, going, going. In Spain everything is at a much slower pace. Meals at restaurants last 3 hours, people will take their time walking, everything is relaxed and chill. It’s sometimes drives me nuts because I’m used to that fasted pace life, but now everything is slowed down and chilled.

Joe: That doesn’t sound like the same Spain as Madrid or Barcelona. Is it as multicultural as it sounds?

Jaisa: Basque Country is really not that much different other than being slower paced and more laid back than the cities. They have their own language and history which is fascinating, but I haven’t lived in the major cities long enough to spot differences in the cultures.

Joe: What have been the biggest living adjustment? We were in Spain for a few weeks, but that is very different from living overseas.

Jaisa: The biggest adjustments would have to be not having as much access to everything like I do in the US. I have to cook for myself, I take public buses, I live in an apartment with the rest of the team. Everything is healthy, there is no fast food, no Uber eats/Grub hub, I don’t have a car, and there are no houses, only apartments people live in and raise their family in. It was a very difficult first few weeks but now that I’ve found my groove and explored outside my comfort zone I enjoy most of the things Spain has to offer.

Joe: On the team you have some players who have been playing professionally for a few years. What have you learned from them about the transition?

Jaisa: I’ve learned to take the time to explore. To learn how to soak everything in. When I first told them that it was my first time coming to Europe, they said that take everything in and appreciate the opportunity you have. Home will always be there, so enjoy it. They’ve also taught me not to expect a lot of foul calls, because they are not as strict and as attentive as referees back home.

Joe: Your team has players from Canada, Serbia, and obviously Spain. How is the communications at practice and in games?

Jaisa: I’m thankful that most of my teammates understand and speak some English so if I have questions, everyone can understand the basics. Between practices and huddles, my coach and players will speak Spanish and then someone will translate it easily for me. On the times where there is no translation, I hope that my limited Spanish skills can help me through the next possession. Some of it ends in disaster so I try and prevent those moments.

Joe: Between HS, UNM, and now the pro team, you have had a variety of coaches—and one would assume different coaching styles. How has that mosaic of different coaches and styles combined to get you to where you are as a player now?

Jaisa: Most of my coaches definitely shaped my mentality and my work ethic to get me to where I am now. I wouldn’t be here without all of my coaches, so I am forever grateful I was coached and mentored by them.

Joe: Have you had a chance to keep up with the Lobo season at all, given the time differences?

Jaisa: Yes, I have! Even with the time difference I try and stay up to watch the lobos play. If I can’t catch the game, I’ll look up the score and the highlights. I watched them play was the thrilling overtime Wyoming game, and I was cheering and screaming at like 1 am and almost woke up my roommates.

Joe: What advice would you give to the current players who are looking to play professionally after school?

Jaisa: I would tell them to be patient. Sometimes the team you play for isn’t the one you expect, but always work hard, and play hard so you can play somewhere better. And also, take any opportunity you have to go overseas. It’s worth it in the end.

Joe: Looking at the schedule the pace is about one game a week. What does a typical week look like between games?

Jaisa: A typical week looks like Monday, Tuesday, Thursday, Friday practice at night at 8pm. Those can go between an hour and a half to two hours. On Tuesdays and Thursdays, I have weights and shooting from 10:30am to around 12:30pm. Saturday is game day, and Wednesday and Sunday are days off. There is a lot of free time between practices.

Joe: Any Lobo fan who looked at your stats would find few surprises:

Is the style of your play similar, or are you accruing those numbers in different ways?

Jaisa: The way we play as a team is slower and more technical. But my role as a player is pretty much the same. I am a scorer and a rebounder on my team so I try to do my job as best as I can.

Joe: There is another stat listed on the roster sheet—and mentioned in some of the team’s Twitter posts. It seems to translate as “value” or “rank”. You are first in that as well. What that is?

Jaisa: Value, from what I am told (I didn’t know what is was at first) is the numerical stat that is given on how important or how valuable that player is on the floor. So if I score, rebound, steal, lower my turnovers, and/or assist well within in the minutes I’m playing, then my value as a player goes up. If I turn the ball over or I foul or let the other team score on me within the minutes that I play, then my value goes down. That stat is very important because that is what the league looks at first in a player before anything else.

Joe: I have found a few short video clips, but none that show the game environment. What are the arenas and crowds like?

Jaisa: It’s nothing like The Pit, that’s for sure. The environment is not as loud, not as energetic as college game. Maybe 100-200 people watch, but they aren’t as passionate. It can be hard at times because in the past, the crowd has always given me energy. My teammates do a good job at keeping the energy up now, but it’s not the same. I really miss it. It’s nice that when we are at the opponent’s home court, I can’t understand their complaints or insults because I don’t speak Spanish. But I also can’t talk to the refs too so it’s a double edge sword.

Joe: Have you done any traveling outside of basketball? Any opportunity to explore Europe a little?

Jaisa: I have done a bit of travelling with other teammates. I’ve been to a few neighboring towns that are bigger. I’ve been to Zumaia where they filmed Game of Thrones, and I’ve been to the ocean. I’ve only travelled through France, so I wish to spend a few days over there. I hope to visit a few more places before the season ends.

I’ve kept in contact with Reese, Richelle and Nike. I’ve talked to them multiple times to see how everyone is and how the pro life is treating them. I also am curious of how there team is and where they’ve been, so I try to talk to them every once in a while.

For those who want to follow Jaisa’s team, here is their web site: