New Mexico head coach Danny Gonzales is trying to create a new culture for Lobo football. He has rules and can be strict with details, but the players seem to be embracing it all.

“He’s cool, he brings a lot of energy. He makes sure that we are always on time to things, always on point,” said running back Bryson Carroll. “If we are not at least five minutes early, we get called out.”

The redshirt junior said that practices are looking much different than in previous years. There’s a noticeable difference in speed, the team is playing faster now. There is also a focus on being physical. 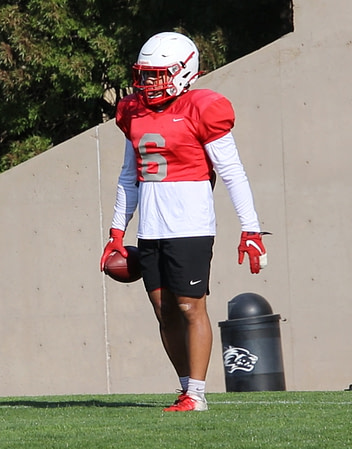 Gonzales has talked about the nature of football and how he expects his players to be the “meanest, toughest, baddest.” Carroll said this is also quite new for this roster.

“It’s all about being physical, that’s what this game is about. It wasn’t emphasized enough in the past, I don’t think, but he definitely brought that to us,” the player said. “That’s our main focus when we go out there and practice.”

Last season Carroll played in 10 games, four of those as a starter. He was second on the team in rushing with 536 yards.

This year his goal is to make the Mountain West All-Conference Team. To achieve this, he is working on refining his skills in different areas while also becoming stronger.

“Being physical, trying to be an all-around back,” Carroll said. “Everybody knows that I have speed and what not. Now I’m just trying to make sure I can become an all-around back where can receive some passes and also be a third-down back. That includes protection and everything.”

Carroll, like everyone else on the team, is still looking to impress Gonzales. On Wednesday, the coach said that everyone was still competing to prove they deserve a starting spot. The only one he has already decided on is punter Tyson Dyer, but even Dyer can’t risk relaxing too much.

“He came out on Saturday during practice and he kicked the ball, I mean, I could’ve kicked it better than him and I’m an old man,” Gonzales said. “So we had a good little chat, told him his position is going to be up for grabs too if he doesn’t change. Yesterday he was significantly better.”

The coach said the team as a whole is still a work in progress and has a long way to go. However, after the third full practice he is already seeing progress in every position. He also admitted that the responsibly is not just on the players, the coaches play a big role too.

“Coach (Rocky) Long taught me this a long time ago, you are either coaching it or you’re allowing it,” Gonzales said. “If we allow it to just kind of fizz away and not up to our expectations, then shame on us.”