Brandon Mason chops it up during offseason

Any way you slice it, Brandon Mason can Chop it Up.

When the New Mexico men’s basketball assistant coach was asked if he wanted to host his own show on Instagram, it wasn’t too difficult for him to say yes. His outgoing personality and close relationships with former players made him perfect for the job, as perfect as the name that Carlos Ramirez, Assistant A.D. for Marketing, came up with.

“It sounds exactly like what I’m doing. Just chopping it up with the guys,” Mason said. “It’s not scripted. There might be a couple questions here and there that people might wanna know that I try to touch on, but other than that, we really are just having a fun conversation. The same thing we do in a phone call, we just do it on Instagram.”

Chop it Up is the men’s basketball program’s contribution to the UNM Athletics Department efforts to put out content while no college sports are currently happening. Football has a cooking show while the women’s basketball team has freshman forward Autumn Watts conducting interviews with her teammates.

Mason was the Lobos’ video coordinator from 2012-14 and returned to UNM when he was hired as an assistant coach for Paul Weir in 2017. Through his time with the cherry and silver Mason has cultivated strong relationships with a lot of New Mexico alumni. 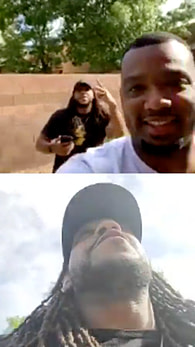 Dairese Gary surprised Brandon Mason during an episode of Chop it Up.

His first show was on April 29 with JR Giddens as a guest. Giddens played with the Lobos for two seasons before being selected by the Boston Celtics as the No. 30 pick of the 2008 NBA Draft.

“I don’t even need to ask him a question. Giddens can talk for 30 minutes on his own. That was actually pretty cool,” Mason said.

The host has had many other guests since then. He can’t pick a favorite episode, but he said one of the most interesting ones featured Dairese Gary.

During that interview, Gary was driving somewhere and eventually got out of the car. He held his phone close to his face as he continued talking. He walked a short distance and came to a stop, not being able to hide a smile. Mason turned around and started laughing in disbelief.

“Dairese Gary showed up at my house. I was surprised and excited,” Mason said.

The two of them continued the interview in the same backyard but still tried to keep some social distance.

“I wanted to tell you, ‘thank you.'” Mason began his interview with Michael Cooper on May 28. “You taught me what a champion was. You bringing me into the Thunderbird organization, I’ll never forget. I wasn’t one of the better players, I was just happy to be there.”

Mason admits he is not worried about his show looking very professional, he just cares about authenticity and having a nice conversation. He gets positive reviews for all episodes, but he said one of the most popular ones was with Charles “Spider” Smith, who played four years for the Lobos (1994-97) and is still the school’s all-time leading scorer with 1,993 career points.

Chop it Up will continue for a while, at least until the 2020-21 season gets closer and Mason’s schedule gets busier. For now, he is excited to continue doing the show and adding to the lineup.

“We’ll do Hugh Greenwood, Cameron Bairstow, we’ll get Tony Snell eventually,” the coach said. “Chad Adams, Daren Prentice, Daniel Faris. The list will go on. Hunter Greene, Marvin Johnson, guys from back in the day as well. I want to do a mixture of eras.”

While he doesn’t expect major changes to the basic structure of the show, Mason is considering some new ideas. He’s hoping to soon have an Aussie week featuring Greenwood and Bairstow.

Mason has always made an effort to keep UNM alumni involved with the program. He and Bairstow organized the first ever Battle of the Rio Grande alumni game in 2016, when former New Mexico State Aggies traveled to The Pit in Albuquerque to take on former Lobos.

Basketball is a big part of Mason’s life. The coach was a former player and his three sons seem very interested in the sport as well. However, for him it’s not just about the game itself. Building and maintaining relationships is a priority to him.

“I take pride in having those relationships with the former guys that helped build the program,” Mason said. “It’s good to hear their stories and the fact that they are so excited to want to be a part of something like that, tell their story and how much they appreciate us for reaching out and building those relationships. Hopefully we can continue to do that.”