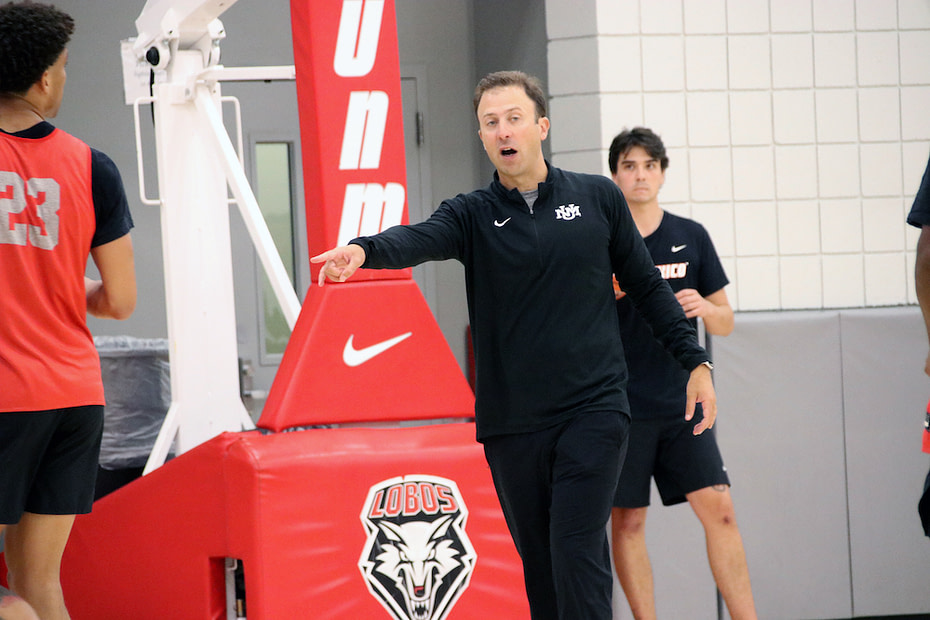 College basketball is still a little over a month away, but official practices are starting across the nation this week.

Richard Pitino and the New Mexico Lobos had a productive summer while getting to know each other. The head coach is feeling confident in the progress his team is making, but he also said he wants to stay realistic about the challenge of turning the program around.

The cherry and silver had a less than ideal 2020-21 campaign, going 6-16 overall and 2-15 in the Mountain West conference. There were many challenges, including not being able to practice or play at home due to the state of New Mexico’s COVID-19 restrictions, but this season will be a fresh new start.

“We have big expectations, but we also have to understand that No. 1 we won six games last year, and No. 2 we brought in eight new faces,” Pitino said. “As much as we all believe and we care, and we know the passion of our fanbase and this state, it’s not very easy to turn a six-win team into a contender. It takes time.”

Here are some updates on how the team is doing:

Pitino said effort was nonnegotiable. When it comes to leaders on the court, he doesn’t necessarily look at the loudest guy. He said the coaching staff is looking for those who have discipline and good habits on and off the court.

“Leadership is more than just a voice. It’s about the way you behave on a daily basis,” he said. “When it’s time to speak up, you speak up and everybody listens because they respect the way that you behave on a normal basis.”

The coach said he is not looking to label just one player as the leader of the team, but that being said…

House, a 6’0 guard from Arizona State, is one of the guys who does not shy away from the spotlight. If the Lobos ever need a guy to speak up, he could potentially be that guy.

“Jaelen is a very good leader. I think he is vocal, he’s not a afraid to speak, which is great,” Pitino said. “I think he is confident, which is a huge attribute for a leader. And I think he is a good player, that helps too.”

House is fast, can shoot the ball and even defend, but Pitino said even he is still improving in some areas. Patience will be key to his success.

“He’s got some really good intangibles but he still has to learn because he is such a dynamic player. He needs to learn to not always try to make it happen right away,” Pitino explained. “He can go get a shot whenever he wants, he is a really good defender. But he also just needs to keep learning the system, keep picking his spots.”

There are a good amount of players in the Lobo roster that could help out on offense. The coaching staff is trying to not get caught up in what they see in practice because they know game time sometimes looks different. However, there are some players who are standing out during workouts.

“KJ Jenkins might be the best shooter in practice right now,” Pitino said. “I think KJ has a natural ability to make shots. He’s got a very nice looking stroke. He’s got the most pure shooting form on the team.”

During his redshirt sophomore season at Kilgore College, the 6’2 guard averaged 16.6 points, 4.0 rebounds and 2.7 assists per game. He was named region XIV MVP and was a First Team All-Region selection. He also helped his team make it to the Region XIV Championship.

Pitino said he doesn’t know what to do with Singleton, but he meant it in a very positive way.

The coach has used him in four different positions during practice, which he admits might be a difficult task for Singleton, but that he also has confidence he understands it from a playbook standpoint.

“He excites me because of his versatility,” Pitino said. “He is a unique player because he’s better with the ball in his hands. With that being said, you’ve got some other guys who may make sense to be the point as well, so I need to figure out where to put him on the court, because you get a unique skill set that not a lot of 6’6″ guys have.”

Birima Seck and Sebastian Forsling are both freshmen and listed at 6’11”. Their youth still shows, but as their games mature, the head coach said they will bring a lot to the table.

Pitino on Seck: “He is not a center, he is more of a forward. He is very fast, long and active. He can do some really good things. His game just has to mature, but that’s just part of it. He’s got a great attitude, his personality is infectious. Always has a smile on his face.”

Pitino on Forsling: “Sebastian is a skilled center. He can pick and pop, and he can score in the post.”