Andy Katz: From Albuquerque to the national stage 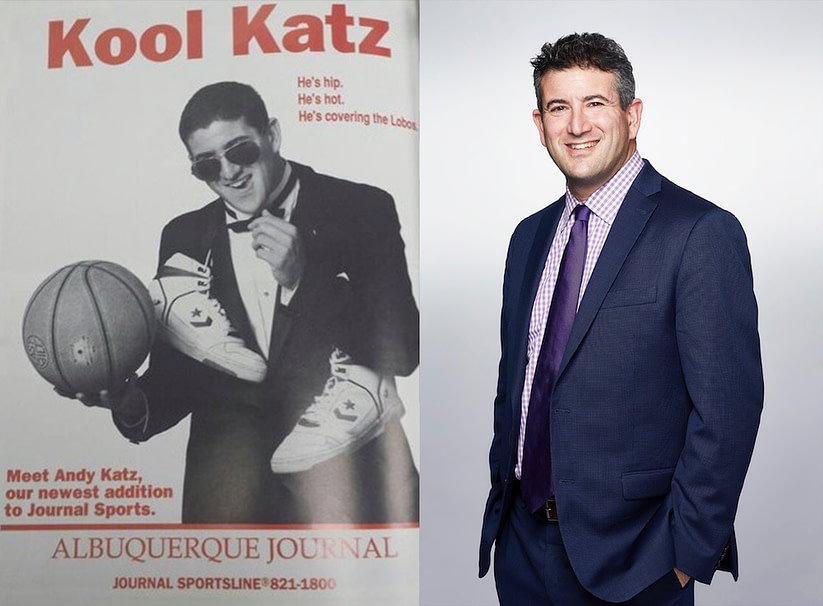 After two days lost in Alaska, Andy Katz finally hiked his way back to civilization and was able to call his parents. Before hanging up, they let him know he had a message from the Albuquerque Journal Sports Editor.

“I called Mike Hall from a payphone in Denali National Park. That’s when he told me he was very interested and wanted me to fly to Albuquerque for an interview for the job,” Katz, a self-described non-camper, recounted.

It was 1990 and Katz was far from being the well-known college basketball analyst he is today. He was only a couple of months fresh out of college and exploring the job market. As a senior at the University of Wisconsin, Madison, he had been covering his school’s hockey team for the Milwaukee Journal. Not exactly his favorite sport to cover, but the Badgers won the 1990 National Championship, which helped Katz get his work featured on the front page.

At the time, there was talk about Milwaukee getting an NHL team. The Milwaukee Journal promised Katz the beat writer position if this happened, but the team never came. Katz randomly found a posting for a position at the Albuquerque Journal and decided he would give it a shot.

Before he knew it, the Massachusetts native was sitting in Los Cuates, a traditional New Mexican restaurant, discovering the heat of green chile. It was June, he is sure of this because he remembers “sweating profusely” in his suit while Hall interviewed him for the job.

Lunch went smoothly enough to have Katz invited to another meeting later that day. He had some time to kill so he decided to go to the movies. Sounds like a casual activity, but it became a major headache in the most literal way possible.

“I leave the car running to go and check the time of the movie. I turn around, run into a poll and smack my head. So now I have this raging headache, basically I gave myself a concussion,” he said.

The concussion was confirmed a few days after Katz returned home and finally made himself go to the doctor. While the interview process was chaotic, it turned out to be worth it because he was offered the job he wanted. In August 1990, Katz was driving across the country to start his life in Albuquerque.

He was replacing Dennis Latta as the beat writer covering the University of New Mexico basketball team. Latta was still with the newspaper and was not thrilled to welcome his newest coworker. He was also probably not impressed with the ad campaign the Albuquerque Journal published featuring “Kool Katz” wearing a tuxedo, sunglasses and sneakers around his neck. 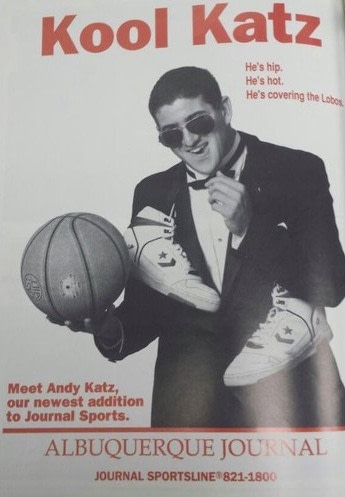 Courtesy of the Albuquerque Journal

The then-22-year-old writer understood the situation but said Latta constantly played mind games to try to get him to leave. It was unfair, but also difficult to avoid because the two of them had to room together when traveling for road games.

“It got to a point during the season where I went to Mike and I said this isn’t fair anymore,” Katz said. “I finally got the courage, here I was in my first real job of my life, to go up and say this. It definitely got to a point where it needed to change.”

As a result of speaking up Katz got a new roommate, a photographer named Jim Thompson who still works for the newspaper today. His experience improved dramatically.

But figuring out his relationship with coworkers wasn’t the only thing Katz had to focus on. He was in the same age group as the college basketball players he was covering and some media members said he was “too chummy” with them. Katz now says it was valid criticism, but back then it was difficult to know where to draw the line since they were his peers.

On the flip side, it helped players feel more comfortable around him and gave him better access. Katz didn’t go to parties with players, but he did visit the sports bar where head coach Dave Bliss socialized with Lobo fans after home victories. The Pit, New Mexico’s college basketball arena, saw a lot of those during that time.

Katz has several fun memories from his time with the Lobo beat, one of these being the in-state rivalry between the Lobos and the New Mexico State Aggies. He described former NMSU head coach Neil McCarthy as “one of the best villains of all time” and recalls a specific game played in Albuquerque.

“He’s smoking a clove cigarette at the bottom of the ramp, which I can’t even believe was allowed then, maybe it wasn’t. It’s certainly not allowed now,” Katz laughed. “He flipped off the crowd or whatever after beating New Mexico at The Pit, then came right to press row and pointed at us. What he said, it might have had some expletives, was basically that he showed everyone by coming up there and winning.”

A victory at The Pit was a big deal because the Lobos didn’t lose much at home. While New Mexico is not a “blue blood,” Katz said the fan support and the noise level The Pit reached is something he’ll never forget.

Katz is currently best known for being a digital reporter, analyst and host for the NCAA’s March Madness. Photo Courtesy of Andy Katz.

“It’s the state’s pro team. There is history in that building,” he said. “I don’t think the rest of the country fully appreciates how much the state cares about that program.”

New Mexico became a special place to Katz. Not only was his first real job there, that’s also where he met his wife. But in 1995, the young journalist left to California for a position at the Fresno Bee. That would become his last stop before jumping to the national level.

In 1999, Katz was in Seattle covering the NCAA Tournament and he took the opportunity to interview for a job at ESPN, where he would spend the next 18 years. It was a whole different ballgame because the company was pushing print reporters to be on air. Katz only had some local TV experience in Albuquerque and Fresno so it was a big learning curve, one that would take his career to a new level.

Today, Katz gets to do work for a lot of different entities including the NCAA, Big Ten Network and Fox Sports. Looking back, Katz admits that a lot of his success came from good luck and good timing, with a decent combination of hard work and getting out of his comfort zone.

Even some of the front page clips that helped him get his foot in the door were something he never expected to write. During his time with the Milwaukee Journal he was assigned to cover Aaron Pryor’s boxing comeback. Katz had limited knowledge of the sport, but did the best he could. It later turned out that the Albuquerque Journal editor who interviewed him was a boxing fan. That lucky coincidence showed Katz that in this business it is important to be versatile and flexible.

However, he pointed out that finding a beat is still the best way to learn the craft because it taught him how to show up everyday and be accountable. His first two jobs were at local news outlets, but the experience he gained there got him to where he is today.

“My five years in Albuquerque and four years in Fresno, while there were a lot of challenges and a lot of growth, I wouldn’t trade it for the world,” he said. “It wasn’t easy at first but I definitely grew as a journalist and a person by being out of my comfort zone. I still think it’s the way to go, to immerse yourself in an uncomfortable situation.”