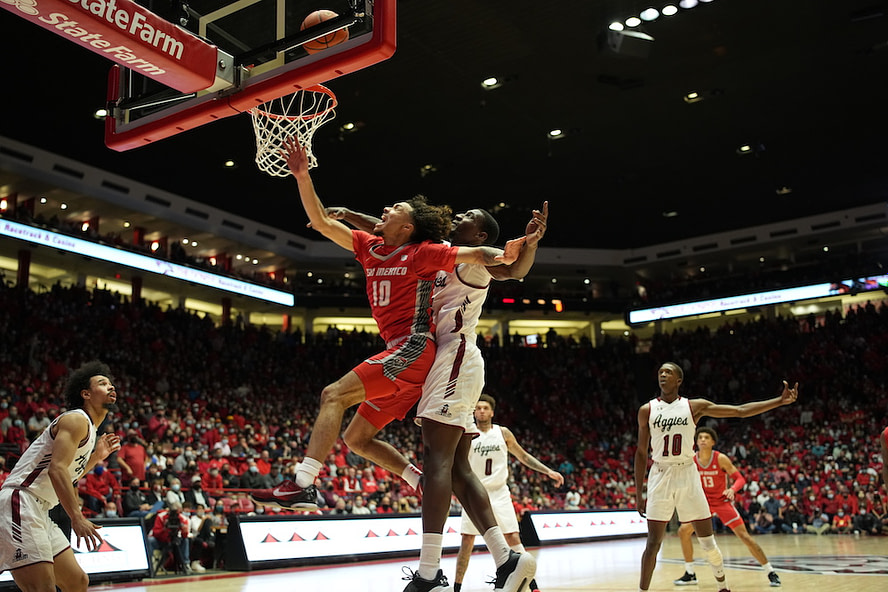 An improbable shot at the buzzer gave the New Mexico State Aggies a 78-76 victory at The Pit on Monday night.

The New Mexico Lobos stood by their bench as they took in their first home loss of the season and watched the Aggies stomp on their logo. UNM head coach Richard Pitino didn’t like seeing that, but he disliked losing a close game even more.

“I’m more offended by our defense in the last play. I’m not gonna worry about other people’s team,” Pitino said. “What I know is we had a couple breakdowns down the stretch that cost us an opportunity to sweep New Mexico State. We didn’t do it.”

NMSU wins it 78-76 at the buzzer. This is how that ending went. pic.twitter.com/XVZLEwLJQL

The game started out with lots of energy but also sloppiness on both sides. Both teams were shooting under 30% from the field through the first 10 minutes of the game.

NMSU averages about 12 turnovers per game, but the Aggies had six halfway through the first period, and eight in the first half. The Lobos fought their way to a by double-digit lead of 23-13 with 7:49 left in that period. That was their largest lead of the night.

By the end of the first half, the Lobos were up 31-27 with Jaelen House and Jamal Mashburn Jr. registering 11 and 10 points respectively. Those two kept it going and would eventually end the night as the only two Lobo scoring in double digits. Mashburn led the offense with 26 points and House followed with 21.

NMSU punched back in the second half. The Aggies found a one-point lead at 37-36 five minutes into the second period. The teams battled it out for a while, and eventually NMSU’s 6’6″ guard Teddy Allen took more control. He would go on to lead the Aggies offensive efforts with a total of 20 points. Johnny McCants and Yuat Alok also finished in double figures, with most of their points coming in the second half. McCants was the one who sent the game into overtime with three seconds left.

One of those fans? Rick Pitino pic.twitter.com/YmHxF3o2XU

It was definitely a nail bitter through the first 40 minutes as well as overtime. With 18.6 seconds, left Mashburn Jr. tied the game at 76 points. Instead of celebrating, the first thing he did was gesture to his team to stay calm. However, the game was won by NMSU’S Nate Pryor with a no-look reverse layup that even he admitted didn’t know how it was successful.

“I think at some point everyone that was in the building will say it was somewhat of a classic,” said NMSU head coach Chris Jans. “As the clock was ticking in regulation and overtime, you could just feel it. Every play was critical. Both teams made some plays and fortunately for us, we made the last one.”